On 5. November 2013, 9.45 pm, the German TV station ARD broadcasted the contribution of Mike Lingenfelser and Hendrik Loven: „Disputed dietary supplements. Do these preparations alleviate the complaints of women in menopause”? Prior to broadcasting the TV crew had made an interview with the Isoflavone Research Initiative. During this interview it became quite clear that the general outcome of this contribution, made upon an initiative of the German Federal Institute for Risk Assessment, would be a tearing apart of the isoflavones. Nothing we had to say would make any change to this intention. In fact, just a tiny fraction of one answer of the total interview (questions and answers can be found on the website) was broadcasted. All other statements on efficacy and safety did quite obviously not fit into the concept. In the following the statements from the eight-minute contribution are presented with a comment. If one takes the time to more closely follow the line of “arguments”, it is easily recognisable how tendentious and manipulative this contribution was – at the expense of women suffering from menopausal complaints once again left alone with their problems.

“CODEX ALIMENTARIUS or: The battle of the 2 giants “ 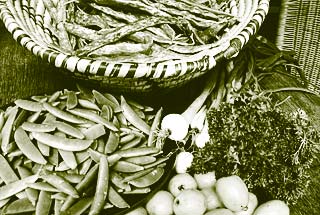 A worldwide dispute is actually raging involving all the political forces, national and international, and goes almost unnoticed by patients and consumers. Facing each other on this battle field we find the so-called „food-mafia“versus the so-called pharmaceutical lobby“, both terms the so entitled opponents react very sensitive to.

And indeed those collective denominations are not helpful: food producers, conventional farmers, bio farmers and biological or synthetic food supplements are being lumped together on one hand and worldwide acting drugs conglomerate, committed small companies, gene technologies concerns and biological traditional drugs producers on the other hand – this is provided for by the legislation but leads off target as shown in the current quarrel.

First of all, let me give you a few facts regarding the „Codex Alimentarius“

The present Codex is not a democratic legitimized text of law.

WTO is the umbrella organization of the GATT, GATS and TRIPS agreements. Its purpose is to eliminate all trade barriers in order to liberalize international trade and subsequently the international free trade. Furthermore it is in charge of the settlement of disputes by trade conflicts. Its core task is the establishment of WTO agreements that have been elaborated and signed by the most important trade countries. On politico-economic level, the WTO follows a liberal foreign trade policy involving deregulation and privatization.

The cooperation mainly consisted in the adoption of the recommendations of the “Codex Alimentarius” as a global guideline for the worldwide food trade.

The Nation States of our planet are voluntary members of those three world organizations. The WTO members (among others all the EU Member States) acknowledge the conditions and rules set in the WTO agreements and are consequently submitted to penalties if they fail to comply with them.

Germany and its Federal Ministry of Consumer protection, Food and Agriculture is member of the „Codex Alimentarius Commission“ (www.bmelv.de)

The „Codex Trust Fund“has been created in 2003, a foundation which activities are financially supported among many others by the FORD-Foundation and MONSANTO.

Meetings are taking place at regular interval in Rome in order to work on the Codex rules, to update and adjust them. The 32nd session of the Codex Commission and its currently 176 members will meet this year in Rom from 29th June to 4th July.

What is the correlation between those political relations and the natural medicine?

„Our food should also be our medicine!” or „People are what they eat! “Those well-known popular sentences illustrate the significance of that issue; yet the legislator prohibits always more clearly that food be connected to health. On the contrary, drugs can be labeled with health statements if acknowledged scientific evidence is provided.

Pesticide, DNA-modified plants, contaminants, increased mass-production, new foods or processed foods, lower resources and climatic causes meet consumer protection, patients’ information, industrial property and profitability.
The laws of world trade meet the laws of nature – and the human being lives between those conflicting priorities and wants to remain healthy (the consumer) or to get better (the patient).

Thus the guidelines for Vitamins and Mineral food supplements will be tightened untill the end of the year 2009. The consumer has to be protected from overdosing and (allegedly) unproved beneficial effects.

That’s in fact the reaction on the long-lasting practice in the health care sector, where a great number of products have been launched as food (food supplements etc…) although they were originally meant to be drugs, thus circumventing the drugs homologation requirements. The example of the “Stevia Robusta” sweetener shows how difficult it is to bring new plants on the market (so far only as cosmetics). The tremendously increased costs for studies and the tightened homologation requirements have already put an end to a large part of well-known natural drugs and have prevented innovations.

Referring to the above mentioned „giants’ battle“, I’d like to stress the following points:

Both the Codex Commission and the Codex Trust Fund consist mainly of the political and financial representatives of our capitalistic world order. And likewise the financial crisis simply cleaned the “market”, so the implementation of a certain health ideology “for the consumers’ benefit” can be perceived as a market cleaning. In this case we have the drug industry fighting against the food industry …and the food industry resists…
There is no place left for differentiation for example between the “diabetic chocolate” and the “ayurvedic remedy” categorized as food (and submitted to the Codex Alimentarius) or between the “Beta Blocker” and the “homeopathic complex remedy” (not submitted to the Codex because categorized as drugs). In fact, the argumentation often put forward of “consumers’ or patients’ protection” appears not to be the main concern – the side effects of vitamins and alleged ineffective homeopathic remedies compared to the side effects of the CHAMPIX smoking cessation aid and other allopathic remedies seem as disproportionate as a David to Goliath battle!

However, the ones who are conscious of those differences can share their concerns regarding naturopathy; indeed, if we look at the future of herbal medicines the following disturbing question can’t be avoided: how long can plants grow free of genetic modifications, with clear water and without pesticide and how long will they be available as medicine for the human being.? And above all: when will the “protected consumer or patient” react?